In the mid to late 1940s, McCarthyism started to grow. Senator McCarthy stated that 205 communists were working in the federal government. This thought process shook the country as others climbed onboard and began accusing others of being communists. This affected Hollywood, as many producers, writers, actors, and stagehands were blacklisted. While McCarthyism grew, many lost their jobs and were blacklisted. Their names were placed in local papers, all under speculation that they were communists.

During WWII, many people left small rural towns, and when the war ended, they were relocated to the big urban cities. Leaving the small towns of rural America allowed those identified as LGBT to find and form communities in these big cities. By the late ’40s, the public was increasingly aware of homosexuals, although they did not make homosexuality more acceptable. In 1947 the U.S. Park Police started a “Sex Perversion Elimination Program” that targeted gay men for arrest and intimidation. In 1948 Congress passed an act “for the treatment of sexual psychopaths” this law facilitated the arrest and punishment of individuals who acted on same-sex desires and labeled them mentally ill. 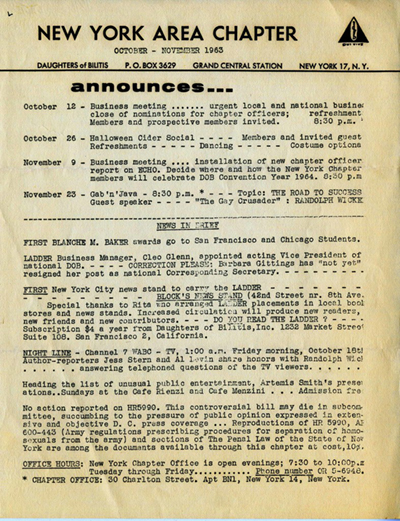 On February 20, 1950, President McCarthy spoke on the Senate floor about individuals he characterized as “unsafe risks.” Two of these cases were about homosexuality. The first was “Case 14,” a known homosexual who had been ousted by the State Department and rehired. The other was “Case 62,” which McCarthy linked directly to homosexuality and Communism. An intelligence official reportedly told him that “practically every active Communist is twisted mentally or physically in some way.” McCarthy implied that the men in these two cases were susceptible to Communist recruitment because, as homosexuals, they had “peculiar mental twists.” These actions prompted Congress to investigate the link between Communism and homosexuality. As the years progressed, this started more committees and further investigations.

In 1953 President Eisenhower signed executive order 10450, which expanded Truman’s loyalty program to include character and suitability issues. This was the first time “sexual perversion” was included in the list of behaviors that would exclude someone from holding a job with the federal government or receiving clearance from a federal contractor. Agencies created new policies and processes for detecting and removing people that were suspected as homosexual. This expanded as they would also investigate their friends and roommates by the notion of “guilty by association.”

The Federal Bureau of Investigation (FBI) and National Security Alliance (NSA) bans on homosexuals lasted into the early 1990s until then-President Bill Clinton overturned them in 1995. Later in 2015, Secretary of State John Kerry apologized to the LGBT community on behalf of the federal government’s Lavender Scare interrogations. He stated, “I apologize to those who were impacted by the practices of the past and reaffirm the department’s steadfast commitment to the diversity and inclusion for all our employees, including members of the LGBTI community.”

The Daughters of Bilitis

The Daughters of Bilitis was the first lesbian rights group in the United States, founded in San Francisco in 1955. The group initially published a nationally distributed lesbian periodical called The Ladder. It began as a private social club but quickly became a national lesbian rights organization with chapters all over the country. Like other social activist groups, they were subjected to surveillance by local police, the FBI, and the CIA.

The founding board members included Del Martin, Noni Frey, Phyllis Lyon, Rosemary Sliepen, and Marcia Foster. These founders believed the name Daughters of Bilitis was both subtle and communicative. Knowledgeable lesbians would glean its meaning, but the general public would not. The group’s name came from a themed song by French poet Pierre Louӱs, “Songs of the Bilitis,” a lesbian-themed song.

The women used their personal funds to keep the DOB afloat, and they often spent more time working on DOB than their own paid jobs. By 1958 there were branches in New York, Los Angeles, Chicago, and Rode Island. The organization reached out to primarily white, middle-class women, the women who had the most to lose when police harassment and job loss were at stake. Under these circumstances, this may be one reason they had a small membership base.

The DOB mirrored the Mattachine Society and its principles. Both groups urged their constituents to participate in psychological studies and to work to actively educate others against the stereotype of homosexuals as a “sickness.” However, the DOB focused its efforts on the causes of women and lesbians.

The daughters of bilitis. (2022, October 16). Retrieved from Library of Congress: https://guides.loc.gov/lgbtq-studies/before-stonewall/daughters-of-bilitis

Adkins, J. (2016). “These people are frightened to death.” Retrieved from National Archives: https://www.archives.gov/publications/prologue/2016/summer/lavender.html

Atomic Training encourages sharing. A credit is required when sharing any part of the sites content.
Please include: “Published with permission of Atomic Training”. Thank you. Please back link:
www.atomic-training.com/lgbtq-history-month-week-3—the-lavender-scare

We use cookies on our website to give you the most relevant experience by remembering your preferences and repeat visits. By clicking “Accept All”, you consent to the use of ALL the cookies. However, you may visit "Cookie Settings" to provide a controlled consent.
Cookie SettingsAccept All
Manage consent

This website uses cookies to improve your experience while you navigate through the website. Out of these, the cookies that are categorized as necessary are stored on your browser as they are essential for the working of basic functionalities of the website. We also use third-party cookies that help us analyze and understand how you use this website. These cookies will be stored in your browser only with your consent. You also have the option to opt-out of these cookies. But opting out of some of these cookies may affect your browsing experience.
Necessary Always Enabled
Necessary cookies are absolutely essential for the website to function properly. These cookies ensure basic functionalities and security features of the website, anonymously.
Functional
Functional cookies help to perform certain functionalities like sharing the content of the website on social media platforms, collect feedbacks, and other third-party features.
Performance
Performance cookies are used to understand and analyze the key performance indexes of the website which helps in delivering a better user experience for the visitors.
Analytics
Analytical cookies are used to understand how visitors interact with the website. These cookies help provide information on metrics the number of visitors, bounce rate, traffic source, etc.
Advertisement
Advertisement cookies are used to provide visitors with relevant ads and marketing campaigns. These cookies track visitors across websites and collect information to provide customized ads.
Others
Other uncategorized cookies are those that are being analyzed and have not been classified into a category as yet.
SAVE & ACCEPT
Skip to content